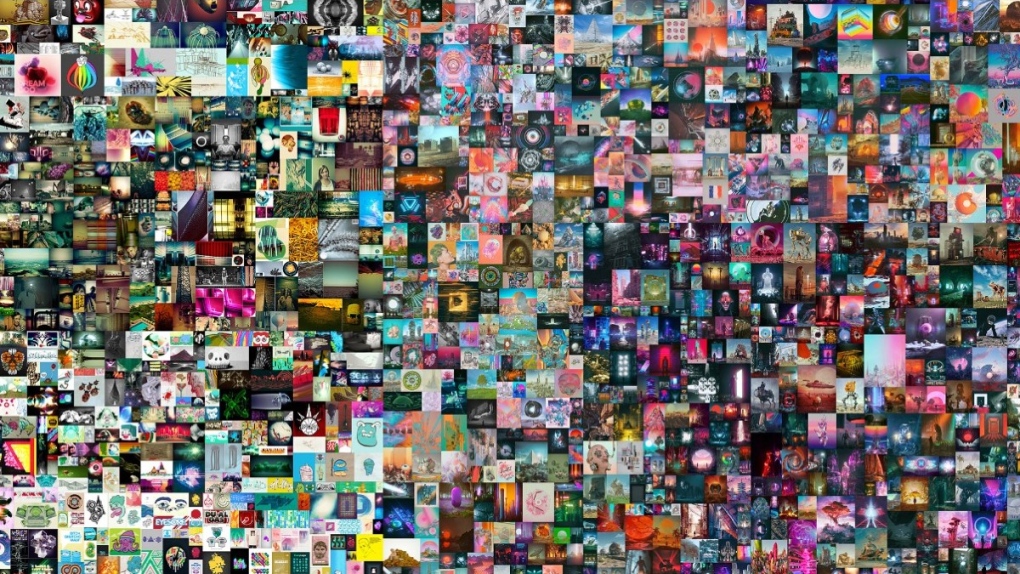 As Christmas of 2021 recedes into the past, a record year in NFT’s is coming to a close.

Across the land people dream of bringing in 2022 with a NFT bang!

As the new year approaches, thoughts of a successful NFT launch are dancing through the minds of artists and collectors. They are dreaming of trading an artistic masterpiece, series, or special collectible.

Blockchain technology, a pandemic, stimulus checks, lockdowns, and a wave of financial speculation converged to feed a NFT frenzy. You can take a look at my analysis of NFT Pricing to learn more.

Take a look at the record-breaking NFT sale we saw in 2021!

Beeple put himself and NFT’s on the map with a piece of artwork that sold for over $69 million!

Beeple, also known as Mike Winkelmann, began making and posting a piece of digital artwork to the internet everyday beginning in May 2007. He calls this project EVERYDAYS.

Through an auction organized by Christie’s in partnership with makersplace, Beeple created a collective of 5000 of these EVERYDAYS. It is the product of 13 and a half years of his digital pieces. It is called EVERYDAYS: THE FIRST 5000 DAYS (pictured above). It sold for $69,346,250.

EVERYDAYS: THE FIRST 5000 DAYS was a Monumental Sale!

Christie’s was founded before the United States in 1766!

EVERYDAYS: THE FIRST 5000 DAYS brought the esteemed Christie’s auction house into the world of NFT’s and crypto. It has inspired the rest of the world to join the fray!

Marking two industry firsts, Christie’s is the first major auction house to offer a purely digital work with a unique NFT (Non-fungible token) — effectively a guarantee of its authenticity — and to accept cryptocurrency, in this case Ether.

‘Christie’s had never offered a new media artwork of this scale or importance before,’ says Noah Davis, specialist in Post-War & Contemporary Art at Christie’s in New York. ‘Acquiring Beeple’s work is a unique opportunity to own an entry in the blockchain itself created by one of the world’s leading digital artists.’

While Beeple made a bundle with his sale of EVERYDAYS: THE FIRST 1000 DAYS, it was only after decades of work.

Beeple has been widely known within internet culture for over a decade. He has a following on Instagram of over 2.4 million and has been creating digital artwork for over 20 years. (All should note that being an established artist, celebrity, or influencer seems to be the most prevalent common denominator among many successful NFT offerings.)

According to Verge, prior to October 2020, the most Winkelmann ever sold a print for was $100.

This is how pivotal NFT technology is! Prior to NFT’s and blockchain technology, there was no way to securely trade digital artwork. A whole new investment class has been spawned.

One should collaborate and cross-market with savvy business interests and other creatives to increase the chances of putting together a successful plan for an NFT release. (Contact our team at Great White Financial to discuss project costs and start brainstorming today.)

Beeple’s sale of EVERYDAYS: THE FIRST 5000 DAYS put him on the mainstream map! He was even featured in an interview by Joe Rogan, which increasingly seems to be the hallmark of success in the moment (at least until they cancel him).

(That’s a whole other story. If you want to read how the free markets should be permitted to do the cancelling, you can read about that here – Freeing the Sports World of Steroids, Silencing Donald Sterling, Stopping Global Warming and more…)

To be thorough in our presentation of the Beeple phenomenon and interview, check out this video that features a close up of the art that Beeple gifted Rogan. NFT artists and those interested in a collaboration with Great White Financial should take a keen interest in his packaging and presentation. Marketing, packaging, and presentation is a huge part of a successful NFT sale!

NFT’s have been hot!! So much that they are going to get their own treatment in our Great White Financial Apex Insights.

Billy Lee is the Creative Director of BeatYourAds.