The Wolf of Wall Street: What Big Teeth You Have! The Easier to Degrade America With. 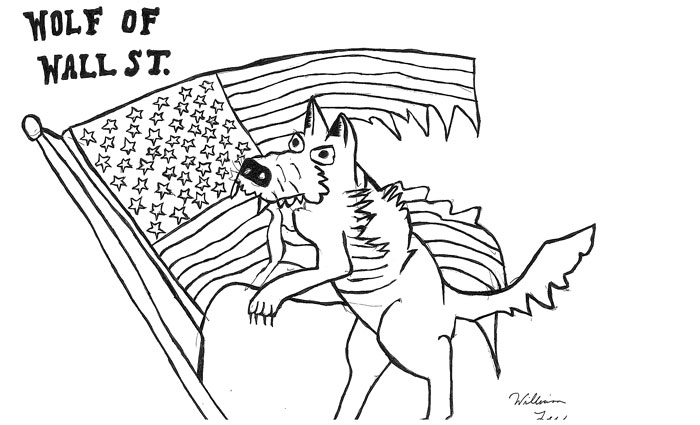 The wolf is an animal – known for its primal nature. The wolf does not attack the well adapted. The wolf hunts and preys upon the weak.

Man is not an animal. Man can reason. The rational mind separates Man from the animal kingdom. Choice in possession of a human being is all together different than choice possessed by an animal.

Often where money and ego are involved, fear and greed dramatically overwhelm people; they can revert to animalistic behavior. Viewing a display of unchecked greed and fear can be engrossing. It can provoke the sort of rubbernecking one would expect at a car accident or the sort of committed viewership that Shark Week inspires. Truly and sadly, individuals in such a state are demonstrating psychotic behavior by which others should not attempt to profit.

Cue the Hypocrisy. Cue the Corruption. Cue the Hollywood Establishment.

As savagely opportunistic as his subject in the film, Scorcese offers The Wolf of Wall Street to appeal to one of the baser components of Man’s personality – the tendency to gawk. In Hollywood, the return on investment from putting on display the shocking idiocy of a madman is almost guaranteed. Money grubbing producers and directors essentially hedge their investments with their very low estimate of the public’s tastes and scruples.

Feeding off the coffers of high-powered financiers, Scorcese creates the $100 million Wolf of Wall Street. The unoriginal film is about the cavorting and childish antics of a convicted felon who never functioned as a true financier; Jordan Belfort was a professional thief who lost more than $200 million of investors’ money. Scorcese has his A-list cast artfully tell Belfort’s debauched story using the F-word 569 times (more than any other feature film ever made according to the Internet Movie Database website). The happenings include “midget tossing” among many other petty and cheap scenes. Scorcese and his Hollywood partners create their own get-rich-quick-at-any-cost scheme that they offensively call a feature film.

When the shocking behavior of Belfort and company lights up the screen to turn the audience into deer in headlights, the Hollywood operators’ low opinion of the tastes and refinement of their audience is self-evident. However, the audience is not to perceive this; they are to discern that the appearance of a celebration of debauchery and disrespect to humanity is something other than trash.

Hollywood would have all believe that the sophisticated audience can see some moral tale being subtly told through the psychotic, anti-social behavior of the tragic heroes of The Wolf of Wall Street. There is even a fancy, sophisticated name for the film’s genre – the black comedy. (Don’t you get it? Robbing people blind and midget tossing is funny!)

The Wolf of Wall Street is an orchestrated train wreck, lacking creativity but guaranteed to make money, like the fake securities that Belfort hocked to guarantee his own income and another’s heartache.

Instead of responsibly and intelligently using the unmatched power of the motion picture to influence people’s thoughts for any good, Scorcese offers up a montage of debauchery and hedonism; and sadly wastes great resources and talent in doing so. This drivel is not representative of what men and women in the financial sector do.

Democracy and capitalism function well with educated, scrupulous consumers and/or citizens. When we fail to cultivate a pervasive awareness of the greater nature of the human being and the responsibilities inherent, the idea of personal responsibility falls out of favor. Then, the system fails to produce what it should – a system where freedom reigns with empowered market operators (see The Responsibility of the Merchant…). While the wolf is an impressive creature in its own right, the Wolf of Wall Street is an insult to Man, free market enterprise, and America.